Back in February, the conservative UK tabloid Mail on Sunday ran an error-riddled piece by David Rose attacking Noaa climate scientists, who had published data and a paper showing that there was never a global warming pause. The attack was based on an interview with former Noaa scientist John Bates, who subsequently admitted about his comments:

I knew people would misuse this. But you can’t control other people.

The UK press regulator, the Independent Press Standards Organization (Ipso) has now upheld a complaint submitted by Bob Ward of the London School of Economics. Ipso ruled that the Mail piece “failed to take care over the accuracy of the article” and “had then failed to correct these significantly misleading statements,” and the Mail was required to publish the Ipso adjudication.

Essentially, Bates had expressed displeasure in the way the data from a Noaa paper had been archived at the organization. Rose and the Mail blew this minor complaint into the sensationalist claim that “world leaders were duped into investing billions over manipulated global warming data.” It would be hard to find a better example of fake news than this one. The piece included a grossly misleading chart that Nasa Goddard Institute for Space Studies director Gavin Schmidt described as a “hilarious screw up”: 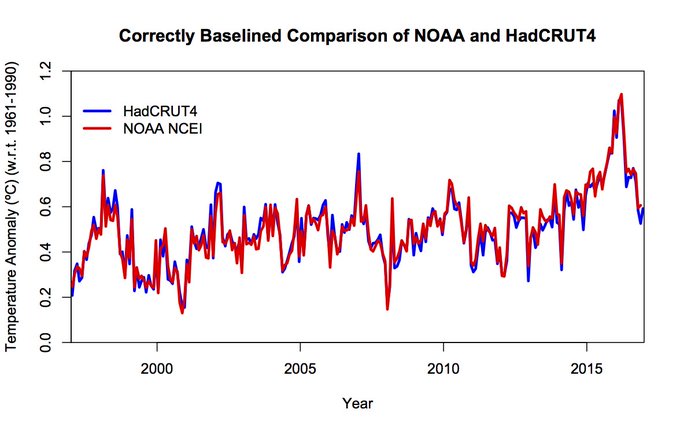 In fact, the Noaa data and paper in question had already been independently verified by other researchers, and are in close agreement with global temperature data from other scientific groups: 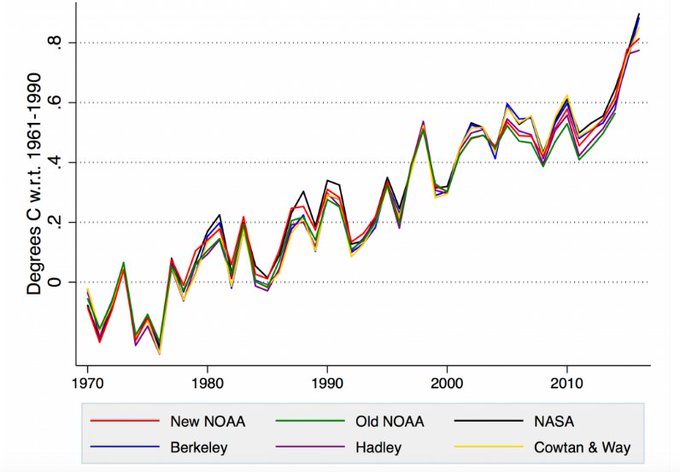 And of course the paper itself had undergone rigorous peer-review prior to its publication in one of the world’s most highly-regarded scientific journals, Science. All signs pointed to the Noaa data and paper being based on sound science that had been reproduced and verified. But that didn’t fit the preferred denialist narrative of Rose and the Mail on Sunday, so they weaved a conspiracy theory that then reverberated through the right-wing media echo chamber.

The errors really aren’t surprising. Rose and the Mail have a long history of climate denial, including error-riddled stories on Arctic sea ice, Antarctic sea ice, human-caused global warming, even the very existence of global warming. And the Mail has such a long history of inaccuracies in general that Wikipedia editors consider it an unreliable source and banned its use. But Breitbart, Fox News, Rush Limbaugh, and other right-wing media outlets have no qualms with publishing inaccuracies from unreliable sources, as long as the story advances their climate denial agenda.

Lamar Smith (R-TX), the chairman of the House Committee on Science, Space, and Technology, has been attacking the Noaa scientists since they published their ‘pausebuster’ paper in 2015. Rose’s piece was almost perfectly timed for one of Smith’s frequent anti-climate science congressional hearings just two days later, but alas, by then reputable journalists had already soundly debunked the story. Smith could only plead with attendees to believe that the story “may be more serious than you think.”

As Ipso has verified, it wasn’t. That Smith still tried to exploit the story, that it reverberated throughout the right-wing media echo chamber, and that the Mail published it in the first place tells us a lot about the narrative this group wants to push. The motivation is right there in the Mail’s headline – “world leaders were duped into investing billions.”

The scientific evidence is crystal clear that human-caused global warming is very dangerous. People who want to maintain the status quo that favors fossil fuel companies, who oppose climate policies that disrupt that status quo, need to somehow discredit that reality. They can’t argue the science, about which there’s a 97% expert consensus, so they instead attack the scientists themselves. They accuse these scientists – who have devoted their careers to bettering our understanding of the workings of Earth’s climate – of fraud, conspiracy, and manipulating data for nefarious purposes. Their goal is to manufacture doubt.

Usually they get away with it. This time the Mail on Sunday’s “significantly misleading statements” were so bad that they were censured, though not before they had misinformed millions of people. However, the Ipso ruling tells us which media outlets are reliable sources on the subject of climate change. Those that blindly echoed David Rose’s misinformation are not; those that debunked the Mail on Sunday’s distortions are.